On the 7th November at IBRP Kingaroy Speedway a local competitor, Josh Harm competed in three separate sedan divisions on the one night. Josh lined up in SSA Modified Sedans, SSA Production Sedans and SSA Street Stocks. This has to be a very rare occurrence or indeed may be the first time it has ever happened. Others have competed in two classes on the same night; but, three classes must be unique.

Josh has also tried his hand in the Modlite category with, admittedly, less success than his sedan career. The Harm name is well known in the South Burnett speedway world and indeed throughout Queensland itself. Josh is a third-generation competitor and continues the family tradition of being highly competitive and is generally at or near the lead of any event. The machinery is always immaculately presented and Josh is respected by all as a fast, fully focused, but clean and fair competitor. 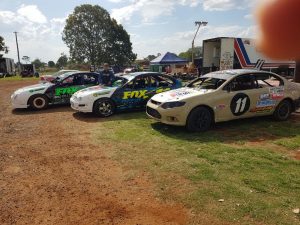 At the 7th November meeting, Josh was offered the challenge to gain a sizeable bonus if he could succeed in all three classes. He was successful in winning a thrilling Street Stock feature. Then came home a close second in a hotly contested Production Sedan feature. Due to the lateness of the night, the Modified Sedan feature was not held.  Still, not a bad effort for a night’s work.

Josh Harm has been successful in winning the 2019 SSA Production Sedan Qld title at the Maryborough venue and still has a long and no doubt successful career in front of him. Josh will certainly be a strong contender the 2020/21 season event to be held at McCosker Rocky Speedway at the end of February 2021.

It will be worth while following his exploits in all three classes.

Any Organisation or Company interested in sponsorship of our Association is welcome to contact The Site Administrator for details.